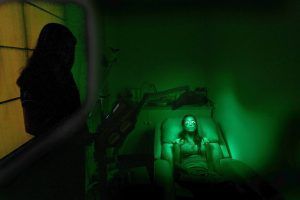 Police have confiscated twelve Chinese devices, which imitated other hi-tech devices for less than half their price | The investigation began after the complaint of a woman who suffered burns to her face

Agents of the National Police have intervened twelve fake aesthetic medicine devices in beauty centers of eleven provinces -A Coruña, Cuenca, Albacete, Barcelona, ​​Granada, La Rioja, Malaga, Valencia, Salamanca, Tarragona, Tenerife-. A woman suffered burns on her face when receiving a beauty treatment aimed at rejuvenating the skin by applying light shots that regenerate the tissue with one of the devices operated on.
The arrested imported the machines from China through a company located in Pontevedra and then distributed them, as if they were original products, for a value of 15,000 euros per unit. It offered them through the social networks and fairs of the sector and showed the buyers their supposed authenticity by giving false certificates that accredited the passing of quality tests.

A La Rioja came one of those machines, but fortunately it did not work. The beauty salon acquired one of those devices (branded “Lifting Hifu” for a price of 11,518 euros.

But when the room disenchanted the apparatus, their managers suspected pr lack of driving instructions, as well as their suspect certificate of guarantee and authenticity. So they themselves were the ones who went to the police to report it, without ever bequeathing to use it.

The investigation began when he noticed that a woman (not a Riojan woman) had suffered facial injuries after receiving a skin rejuvenation treatment at an aesthetic clinic. The agents, after this fact, suspected that it could be a forged device, so they took the necessary actions to find out the origin of the machine used during the sessions. Soon confirmed their suspicions and saw that it was the imitation of high-tech units, of which there are only 30 pieces in the Spanish market, and whose price is around 40,000 euros.

Advanced research agents found the supplier, a company located in Pontevedra that had been importing these fake devices from China for more than three years. Once the non-original product arrived in Spain, the person in charge of the merchant offered it in social networks and beauty fairs, convincing potential buyers of its originality through false certificates that proved that they had passed demanding quality tests. In this way the owners of aesthetic clinics suffered a deception by paying more than 15,000 euros for an original product when in fact they received a false copy.

Eleven clinics, one of them from La Rioja

After locating the company in charge of the sale, the agents devoted their efforts to discerning which had been the clinics that received the fake beauty devices sold by the Galician company. In total twelve machines have been located and intervened in eleven provinces throughout the country.

These devices were in operation until their intervention, which has affected not only the image of the buying brands, but also posed a risk to the health of customers. The person responsible for the illegal sale has been arrested in Pontevedra for an alleged crime against industrial property, a crime of fraud and for falsifying documents.

In addition, two records have been made in which pendrives and cartridges for the operation of counterfeit machines have been operated.