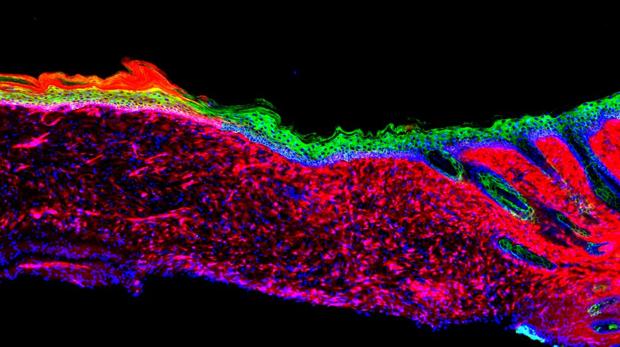 Science aims to turn human beings into lizards or perhaps ajolote, that curious Mexican amphibian with an astonishing biological ability: it is not only capable of growing a lost leg or tail, but also its heart and other internal organs. Scientists at California’s Salk Institute, led by Spain’s Juan Carlos Izpisua, have taken a further step in that direction to fulfill the dream of regeneration, which could allow the human organism to repair itself when it is damaged in an almost natural way.

In the journal “Nature” the researchers detail how they have healed a large open and deep wound by regenerating multiple layers of skin without using grafts. They have done this by reprogramming cells from an injured area into new skin cells. One of the keys is that the experiment has been carried out on mice, mammals such as humans that do not have the regenerative capacity of amphibians.

If these results could be transferred to the hospital, this advance would open the door to numerous medical applications: the treatment of large burns, diabetics with ulcers that never close and could even give clues to better understand skin cancer among other dermatological problems.

Its authors also aspire to revolutionize the aesthetic world and reverse the imprint left by the passage of time on the human envelope. With this new approach, a skin furrowed by deep wrinkles could also return to the smoothness of youth.

Although for the time being, the latter has yet to be demonstrated. “What is important today is that this work is proof of concept that endogenous regeneration is possible. We can regenerate a three-dimensional tissue formed by different cell types from the organism itself and without the need for an external transplant. That is not possible in a mammal, as the textbooks have taught us,” Juan Carlos Izpisua, professor of the gene expression laboratory at the Salk Institute and professor of Developmental Biology at the Catholic University of Murcia, explains enthusiastically to ABC.

The idea is that one day any damaged tissue can be repaired without removing cells from the body or culture in the laboratory. The next step is to regenerate “the cartilage of the joints, kidneys and heart” with this strategy.

From inside the body

Mammals do not regenerate, but there have been other scientific attempts to force Nature. Japanese scientist Shinya Yamanaka received the Nobel Prize in 2012 for opening the first door to regeneration by finding a simple formula of four genes with which to return human cells to their original state. Thanks to this work many scientific teams have been able to create from skin to “mini-kids” or lungs and blood vessels. What is called “laboratory organs”.

But this time instead of working on a Petri dish, with culture cells, the Izpisua team has achieved it from inside the body, in the area where the injury occurred. It was enough to inject a cocktail with four reprogramming factors.

This had already been attempted in the heart to generate new heart muscle cells, although a complete tissue such as the skin with its multiple layers had never been created.

To treat the ulcer, instead of making a skin patch in the laboratory or transplanting the skin from another site to cover the wound, the Salk Institute team reprogrammed the cells that naturally intervene in healing. He turned them into basal keratinocytes, that act as precursors to different types of skin cells. “We started making skin where there was none,” says Masakazu Kurita, a plastic surgeon and co-author of this research.

It wasn’t easy to get the final recipe to completely regenerate the skin. This group of researchers took five years and more than 2,000 different experiments to obtain the definitive formula. With the patience of the traditional scientific method, combinations of 86 different reprogramming factors were tested to a four-factor cocktail after numerous trial and error tests.

With the treatment, new skin was created in less than three weeks. Within 18 days of application, the wound was closed and covered with healthy skin. Complete regeneration was not achieved until six months later, a time that researchers hope to shorten.

Skin grafts, which treat large burns, also take three weeks to fabricate in the laboratory. But once they are transplanted, they take a couple of more weeks to “catch” the skin, and they don’t always succeed. The failure of the graft forces to repeat it and in this delicate and long process many patients die. If regeneration worked, all this suffering would be avoided because the skin would heal naturally. “And Nature works better than humans,” say the researchers.

The alternative to laboratory grafts

Until now the best alternative for large burns was the skin manufactured in the laboratory to the patient’s size. Only a small sample of healthy burned skin is needed to manufacture it without the risk of generating rejection. 6 centimetres are enough to obtain up to two metres of new skin. In Spain, tissue engineering has been able to replace up to 80 percent of a patient’s burned surface.the advantage of this laboratory skin is that it attaches as well as autografts, transplants that are done by removing skin from an area of the body and stretching it mechanically to get more quantity. But they take three weeks to manufacture and during that time the patient is exposed to an increased risk of infection. In order to protect the patient, corpse skin grafts are usually used, with which the burned patient is wrapped and a bridge solution is obtained. This whole process has a very high economic cost, is traumatic for the patient and does not always get the expected result. The endogenous regeneration of the skin would avoid all this expensive and delicate process.