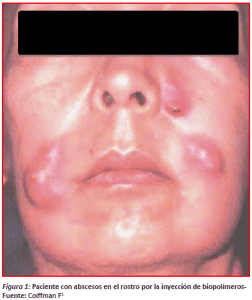 The term “iatrogenic alogenosis” has been designated to describe a disease that is produced by allogeneic substances, that is, foreign to the organism; And produced by the doctors or the people who have injected them. Among these people are “cosmetologists” or “aesthetic physicians” who do not know the real danger of what they do.

This is a disease of recent onset. However, it has a history that goes much further back, when in 1899, a doctor decided to inject paraffin into the scrotum of a child who had a testicular tuberculosis removed, the purpose was to simulate the missing testicle.

Substances from mineral and vegetable oils, solid and liquid petrolates and other paraffins, were further developed over the following years. But it is not until 1920 that the first publications of health problems are known, such as: pulmonary embolism, granulomas, skin tumors, deformities, among others.

There are more than 40 substances, created by pharmaceutical laboratories, to be injected into the skin for aesthetic reasons. Many of them are illegal.

According to a study carried out in Colombia by Dr. Helen Amelia Sanz-Barriga, 358 cases of iatrogenic allogenosis have been reported in the last 10 years for every 1000 patients using biopolymers, of which 97% are women.

This results in a large number of patients who must be treated by those who, first, should have performed the procedures; plastic surgeons with experience and knowledge in the field.

Of all these, the best known is liquid silicone or biopolymers.

Also called “tissue implants” or “expandable cell implants”, they are substances of different origins, some are derived from petroleum, others are of vegetable origin and many are of synthetic origin such as liquid silicone.

Biopolymers can be dangerous mainly for 3 reasons: 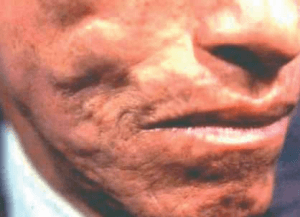 These range from general symptoms such as: pain, fever, decay, joint pain, malaise and depression. And local signs such as: inflammation, irregularities in the skin, edema, erythema, keloid scars, hyper or hypopigmentations, ulcerations, hardening, necrosis and fistulas.

There are biocompatible substances that can be used safely.

Collagen, which is a set of proteins composed of three chains of polypeptides, each containing one thousand amino acids. It can be extracted from the patient’s own skin and cultivated.

Hyaluronic acid, found in the connective tissue of mammals and in the extracellular space, is also used as filler.

Self fat, can be extracted by means of liposuction, be processed and re-injected safely as filler. 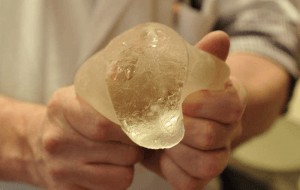 Prostheses or silicone implants for breast augmentation or buttocks are currently wrapped in a layer that insulates them from the body. They are also made of cohesive silicone gel, a type of silicone that by its texture limits and precludes the migration of the silicone. Silicone prostheses used in surgery are safe, unlike injectable biopolymers. Example: breast reconstruction after breast cancer or preventive mastectomy.

Finally we will discuss the treatment for people who currently suffer from the complications of iatrogenic alogenosis.

The treatment is fundamentally based on two things:

Because the silicone extraction surgery is complex and very different in each case, it is difficult to talk about a surgical technique and it would be difficult to understand because most patients believe that they will run out of lips or very thin or with visible face scars, and this is not so.

We will show some cases of before and after, in the section on biopolymer extraction, and if you have any problems, we advise you to go with Dr. Sanza or his department of extraction of biopolymers at Clinica Sanza and we will attend you with the affection and knowledge that we have of this pathology.

As a general recommendation, we advise you Always be a specialist in plastic surgery who performs any type of cosmetic treatment that involves injecting or introducing any type of substance in your body, to avoid iatrogenic alogenosis. If you currently have this problem, feel free that there are alternatives to help you in most of the cases.